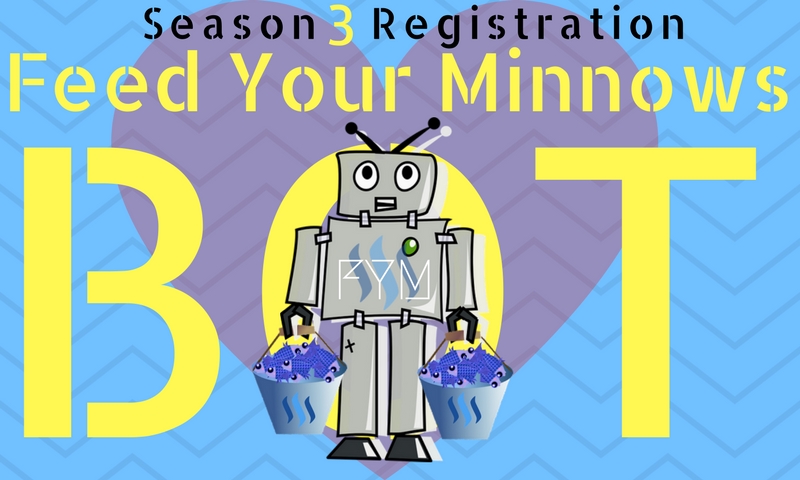 Feed Your Minnows is a great project that @oleg326756 came up with where he would feed his Minnows (his awesome followers). He would make a post once a week and all the SBD earned by the post will be paid out to the registered Minnows.
This inspired me to make a Feed Your Minnows of my own, with a little twist of course!

The awesome minnows who joined Season 2

Holy smokes! We went from 42 members to a staggering 60 who registered for Season 3!

Registering for Season 3 will let you allow you to stay in the Voting Pool for another week. Next week the upvotes WILL be even BIGGER since we will have added a new lease on top of our current one! If you are already a member you know what to do! Scroll down, upvote and comment with #feedme.

Sadly there were some members who didn't follow all the rules and were not included in the voting pool.
Don't worry though, you can still be added to the pool! All you have to do is make sure you follow the rules of this post.

Users who did not upvote:

Users who paid the 1 SBD for the lifetime membership:

The total SBD earned by the post was 2.218 SBD. Not that much but every bit helps! The users who went for the lifetime membership helped a lot with the leasing of SP. We were able to lease another 337.905 SP for 4 weeks! That puts us at 625.558 STEEM POWER in total!

Currently the bot has 625.558 Steem Power and is upvoting away at around $0.05 per upvote. Each member can only receive one upvote per 24 hour period. Spreading the upvotes out making sure no user abuses the system.

What does he do?

He upvotes all you awesome Minnows of course! Once you register as a Minnow who needs some feeding you will be able to receive upvotes from the BOT. He will only start upvoting next week once this post reaches payout. =)

How do you register to be fed?

2. Make sure you are a follower. Steemit is a place to make awesome friends so follow and chat a bit, more friend equals more upvotes! No follow, no upvote.

3. Upvote this post. in order for the bot to lease some SP we need to generate some SBD with this post so we can power up the bot and activate him!

It's that simple! When the post reached payout we will take all the registered members who upvoted, followed and registered with the #feedme hashtag in their comment. The bot will then feed them for one whole week! Each week we will have a new Feed Your Minnows Post so if you want to continue being fed make sure to comment and and upvote again to be registered. =)

How the bot operates:

It will upvote each registered Minnow only once every 24 hours, this will keep it fair and make sure some Minnows do now gobble up all the upvotes.

The bot is small for now but all the SBD earned by this post will be used to lease some SP for the bot, that way he will slowly grow and the feed for his Minnows will be more and more each week. =)

The bot will also accept donations to help power up the bot so if you have some extra Steem or SBD lying around and want to help out then feel free to donate to @feedyourminnows. All the funds will be used to power up the bot and help spread the love . So if you want to donate just leave donation in the memo.

Currently the bot will upvote the members for one week, then a new Feed Your Minnows post will be posted and the same procedure of commenting #feedme and upvoting the post will register you for the upcoming week's feeding frenzy! Not all members want to check in every week for the Feed Your Minnows post so the option is there to buy a lifetime membership by transferring 1 Steem/SBD to @feedyourminnows with feedmeforlife in the memo. This will give you a lifetime membership to @feedyourminnows! Once again all funds will go towards growing the bot so he can upvote all the minnows! Thanks again to @oleg326756 for coming up with the initial Feed Your Minnows idea! You are awesome mate!

If you like the @feedyourminnows bot then maybe you will like @qurator. Has some similar features but with a much bigger upvote! Visit @qurator for more info.

Thank you for reading! Steem on Steemians!

Submit
$5.11
119 votes
74
Authors get paid when people like you upvote their post.If you enjoyed what you read here, create your account today and start earning FREE STEEM!
Sort Order:
[-]
rkrijgsman (57)  ·  3 years ago

It is more agreeable to have the power to give than to receive.

Great idea :) please #feedme . My next steemdollar is going into the lifetime membership

Awesome! Glad you like it! You are most welcome and looking forward to feeding you for life =)

Pretty amazing idea. #feedme I think I might do the weekly season entering until I can send 1 STEEM :P thanks for this. @OriginalWorks

The @OriginalWorks bot has determined this post by @scrooger to be original material and upvoted it!

You are welcome! You will make that 1 STEEM/SBD in no time! For now go for the weekly, this will be a long term project so you have all the time in the world =)

See you went for the lifetime membership! Awesome! =)

That's right. I'll always try to come back and support the posts so bot can keep growing :)

This post has been ranked within the top 80 most undervalued posts in the second half of Sep 15. We estimate that this post is undervalued by $14.38 as compared to a scenario in which every voter had an equal say.

See the full rankings and details in The Daily Tribune: Sep 15 - Part II. You can also read about some of our methodology, data analysis and technical details in our initial post.

If you are the author and would prefer not to receive these comments, simply reply "Stop" to this comment.

Will do! Wow you grew your reputation pretty fast! Well done mate! =)

Been here 13 months, but only active since may - not too bad I guess. Cheers!

You shall be fed! Over and over again! =)

Thank you and #feedme !

Most welcome! Feeding is what the bot does! =)

Oh that is how you say me in different languages, :-)
Mixing it up for you!

Our little thing got scheduled for next week. =P Will update you when it goes live. =)

Congratulations! This post has been upvoted from the communal account, @minnowsupport, by Kubby Elizabeth 'Pink guardian' from the Minnow Support Project. It's a witness project run by aggroed, ausbitbank, teamsteem, theprophet0, someguy123, neoxian, followbtcnews/crimsonclad, and netuoso. The goal is to help Steemit grow by supporting Minnows and creating a social network. Please find us in the Peace, Abundance, and Liberty Network (PALnet) Discord Channel. It's a completely public and open space to all members of the Steemit community who voluntarily choose to be there.

This post has received a 0.78 % upvote from @drotto thanks to: @banjo.

Such hunger, such starvation ;)

Will do mate! The bot is dishing out upvotes like crazy!

#feedme @scrooger! Thank you, have a great day!

Check out @qurator for a similar project but with a 1SBD/Steem registration fee. Gives out decent upvotes, and as it grows it will be worth more. =)

Ahhh thanks! You are such an awesome follower, always checking in! Thanks!

Check out @qurator for a similar project but with a 1SBD/Steem registration fee. Gives out lifetime upvotes, and as it grows it will be worth more. =)

Awesome, thanks for the tip!

I was hungry, but I just got #feedmeforlife 'd

Whoohoo! Smart move! You have been added to the feedmeforlife pool!

Check out @qurator it's basically the same concept but with more members and more SP. =)

Thank you for helping all the minnows!

You are most welcome! Here the minnows are helping themselves! I simply run the bot for you awesome minnows! =)

#feedme A fun way to help minnows grow, a great way to start learning and sharing @scrooger (BTW love the name takes me back to comic books of old).

Thanks! Yeah a fun way indeed! Like helping out where I can, even if it's just by a little each day! =)

See you went for the feedmeforlife option! Nice! You shall now be fed for life! =)

Check out @qurator for a similar project also with a 1SBD/Steem registration fee. More members and a bigger upvote, you might like it. =)

This is a great way to help us minnow's so I sent 1 sbd for the lifetime membership and a 100% upvote and now a follower!

Whoohoo! That is awesome! Appreciate the vote and follow!

You have been added to the feedmeforlife pool!

Thank you, I will check it out!

Awesome stuff, every minnow needs to be fed. Noticed that you are an expat living in south korea like myself, would be awesome to get together and talk some steemit sometime

That would be awesome! Where in SK are you?

Been away for a few days. Should be back more now. #feedme

I will do the lifetime payment now.

#feedme please! You won't regret it!

This is great #feedme please :)

What a generous initiative. #Feedme !

This is great! plz #feedme sir

#Feedme :) and thanks alot for the idea :D